Details of the meeting held closed-door between Governor Okezie Ikpeazu and the leader of the main opposition All Progressives Congress (APC), in Abia State, Senator Orji Uzor Kalu have emerged.

Recall that Governor Ikpeazu had received Senator Kalu, Chief Whip of Nigerian Senate at his Umuobiakwa country home at Obinngwa LGA, Abia State during the weekend.

Revealing the outcome of the closed-door meeting between the two Abia leaders, which were contained in a release issued in Umuahia, the state capital, the State Commissioner for Information and Strategy, Barrister Eze Chikamnayo, quoted Senator Kalu as commending Ikpeazu for the security and peace that was witnessed throughout the Christmas period and New Year festivities attributed this feat to exceptional ingenuity of the governor in galvanizing human and material resources for the common good. 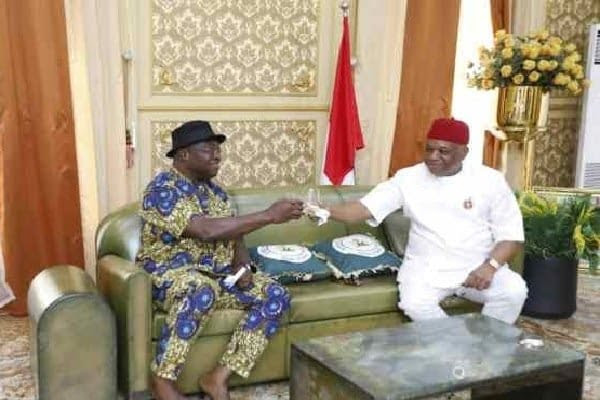 “He observed that as he drove to Obingwa, he was elated by the quality roads that crisscrossed the landscape together with other numerous achievements in the area of SME development, Youth Empowerment, Sports, Agriculture, Education amongst others, thanking Governor Ikpeazu for his untiring efforts towards rebuilding and repositioning Abia for the good of all Abia people.

“Kalu also requested Ikpeazu to extend his caterpillar revolution to the Umuahia-Bende-Akara-Igbere-Ohafua expressway; which the federal government has refused to reconstruct despite repeated appeals by him to the authorities at the federal Ministry of Works.

Continuing, Mr. Chikamnayo further quoted Governor Ikpeazu as reminding his visitor that the essence of leadership is to serve the people and reiterated that his style of leadership is devoid of bitterness and unnecessary bickering.

“He appreciated his guest and called on other Abia elites to cooperate with the government in its bid to take Abia to the next level.

ALSO READ: How over 50 herders armed with AK-47 killed a village head, others, razed houses in Ondo

“The Governor asserted that he is looking for how to woo all the disgruntled people who are not satisfied with their own party into PDP, a Party Dr Okezie Victor Ikpeazu said remains the only viable platform that holds the key to the peace and prosperity of Nigeria”, the press release concluded.

Journalism requires funds to be effective and by your support, you are helping to sustain a journalism of relevance and ensuring it remains free and available to everyone, while still continuing to reach out to readers with incisive, entertaining, enlightening and helpful information.